Puglia is a huge region that forms the heel of the Italian boot in the south-east of the country, it is bordered by Molise to the north, and by Campania and Basilicata to the west. The Italian wines of Puglia are sunny and generous, they are generally red and dry, sometimes mellow. The best known Puglia wines are P...

Puglia is a huge region that forms the heel of the Italian boot in the south-east of the country, it is bordered by Molise to the north, and by Campania and Basilicata to the west. The Italian wines of Puglia are sunny and generous, they are generally red and dry, sometimes mellow. The best known Puglia wines are Primitivo di Manduria and Salice Salentino. The region has 28 DOC (equivalent to the French AOC) and 4 DOCG (superior AOC).

History of wine production in Puglia

The port of Brindisi and the town of Salice Salentino were founded by a community of Cretans who settled in Apulia 4000 years ago. Until the fall of the Western Roman Empire in the 5th century A.D., Puglia was a very active wine producing and trading region, thanks in particular to its strategic geographical position on the Mediterranean. After a long period of relative quietness, the region experienced a revival of interest at the beginning of the 20th century, with the expansion of vine planting and the birth of numerous cooperative wineries. A century later, Puglia is now one of the top 3 wine producing regions in Italy (together with Sicily and Veneto). The European Union has banned the planting of new vineyards, and subsidises the grubbing up of existing vines and encourages the recognition of the historical wine heritage.

The climate is extremely favourable for the vines. Italy's "California" enjoys record sunshine and a ripening season free of climatic accidents. The region is free of mountains and its soil is red due to its high concentration of iron, like the Coonawarra region in Australia. It is an ideal combination for the production of great red wines for ageing, while its coastal and southern location favours the consumption of white and rosé wines.

The region of Puglia is a bit like the Italian Languedoc! There is enormous potential to revitalise a region historically concentrated on volumes and to invest in native grape varieties with high potential. The originality of the small producers and cooperatives lies in the blending of several grape varieties allowing them to obtain very well-balanced wines. Plantations of international grape varieties, such as Cabernet Sauvignon, Merlot and Chardonnay, are accelerating and offer a particularly relevant alternative, both in Italy and abroad.

A very qualitative grape variety could be Nero di Troia or Uva di Troia, which is included in the DOCG Castel del Monte appellations. It produces fine, well-balanced wines, capable of improving with age. Negroamaro (bitter-black) reveals a great tannic and aromatic structure, which allows the production of great wines, particularly in the DOC Salice Salentino. It can be softened by the addition of Malvasia Nera, making the wines more accessible when young. Finally, Primitivo (called Zinfandel in the USA) is a source of dry and semi-dry wines that are easily appreciated for their generous fruitiness and rich aromatic palette. In the DOC Primitivo di Manduria, yields are lower and the wine is aged in barrels, producing highly concentrated and full-bodied wines worthy of California Zinfandel.

White wines are generally very expressive, mostly consumed locally and they accompany richly flavoured dishes admirably. The Verdeca grape variety is known for its high quality and is used in the DOC Locorotondo and DOC Martina Franca. It delivers aromas of citrus fruit, honeysuckle and flint. The Chardonnay plantations in the southern part of the region are commercially successful and broaden the range of white Puglia wines.

Other specialities from Puglia

One of Italy's legendary wines is the "Five Roses" rosé from Leone de Castris. Until 1943, this wine made from Negroamaro was consumed locally and in bulk. The soldiers at the nearby American base were so fond of it that in 1943 they asked to bottle the wine to take it to the United States. The first bottling was therefore done in beer bottles brought by the Americans themselves! If one day you pass through Salice Salentino, take the opportunity to visit the museum in Leone de Castris where you can see an original bottle from 1943. 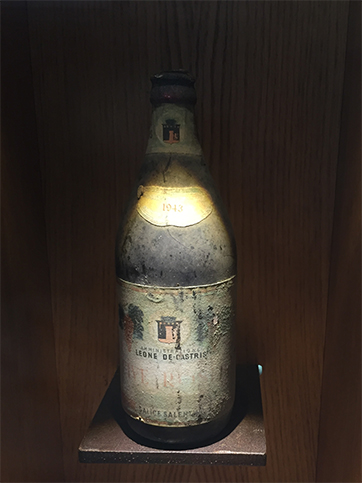 Alfavin.ch is proud to work with :

Read more Show less
There are 56 products.
Showing 30 of 56 items