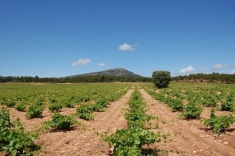 Long dedicated to the bulk wine trade, whose buyers particularly appreciated the teinturier and powerful properties of the local varieties, the region of Almansa has gradually taken a turn in terms of quality, finally being given a D.O. Almansa appellation as of 1973.

Located in central-eastern Spain, in the province of Albacete to the south-west of the city of Valencia, the D.O. Almansa appellation is in the transitional area between the plateau of Castilla-La Mancha and the Mediterranean Sea. The climate is continental with very cold, dry winters and hot summers.Located at an altitude of between 700 and 1000 metres, the vineyards put their roots down in relatively unfertile land, making for low yields and high concentrations.

The most widely-represented varietals include the local varieties of Garnacha Tintorera and Monastrell, which bring distinction to the appellation of which the Bodegas Santa Cruz de Alpera cooperative - which brings together more than 400 growers and controls over 7400 acres - is one of the driving forces.(Alfavin.ch)

Do you know the producers from Almansa and specially Santa Cruz de Alpera?